One week after the BTC halving – where are we at?

The third ever Bitcoin Halving happened just a week ago (on May 11 2020) and since then Bitcoin has been consolidating somewhat sideways.

Is the price on its way up?
What other treats should we look out for?

Let’s take a look at how the market reacted to this epic event and see what we can expect in the coming months.

At first the market seemed undecided. Should we be selling, should we be buying… many of the seasoned traders were keen on shorting due to experience from the previous two halvings where the market took a short-term dips before recovering and starting some serious bull runs.

In 2016, when the second halving occurred, we saw a slight increase in the price at first, but then we lost around 30% from the pre-halving value. As we can see in the chart below, the first week added more than 7% – possibly in unison with the overall positive sentiment that carried on from the halving, but most of these gains were lost in the second week, when we dropped by more than 5%. Then we made a more serious dump by 26% in the following week, which was quite significant at the time. If we count the overall correction from the weeks prior to the halving, when we had a high of $780 to the low we had at the start of the 4th week after the halving, we lost a total of $300.

At the time Bitcoin was below $800 dollars, so that $300 felt like losing half its value (although it was actually less than 40%) but to lose so much just after the halving seemed frightening to many. Luckily, I was buying this dip, although I can’t say I was too clever about it… more like lucky gambling on my part to be honest… I wasn’t yet trading and charting was not involved in my decision making. I just thought that Bitcoin would only be going up in the future, so, with my little experience and huge optimism, I was all in. And lucky for me, we went into a super-bull run soon after which took us to price discovery in 2017 when we touched the $20k.

However, that was luck rather than anything else, so this time I am trying to use my experience and knowledge of this market and see what the stars are saying… uhm, I mean, the candles.

Currently Bitcoin is holding the mid $9k level for a few days. There were a few attempts from the bears to bring it back in the $8k zone but they fail every time. We now see a strong support level at $9,200 while the major resistance is $10,000. It looks like any moment now we might break out of a long-term descending resistance trendline that has been forming since 2018. Once that happens, we are officially in the bull zone.

In a more bearish scenario, if bitcoin fails to stay above the trend line support, it could even decline below $9,200 and the 100 simple moving average (4-hours) in the coming days. The next major support is near the $9,000 level. Any further losses might push the price towards the lower support all the way back to $8,200.

Is this likely to happen is anyone’s guess but what is more important to me is the longer term perspective.

What we’ve seen in the past two halvings is that after a reasonable consolidation period between the support and resistance levels, Bitcoin begins a strong bull run. This happens somewhere in the second month post-halving. Around the 40-50 days in fact. We can see this clearly from the chart below (provided by @chartBtc)

What we see here in Blue is the first halving, orange is the second and the green line is the current price movement. If history is to repeat (as it often does), we should be expecting the bull run to start somewhere in July.

At this point a bearish scenario on Bitcoin seems unlikely, but we still have to be cautious as we enter the second and third weeks post-halving. This is really the testing period and once we move into the next month, I think we will have less to worry about, at least in terms of the price direction – this should have become clear by then.

On another note, the daily revenue of mining has dropped significantly in the first week post-halving and that’s not a surprise since we now produce half the amount. However, this is of concern as it means that many miners could go out of business if the bitcoin value doesn’t jump soon. A concern that I expressed a few months ago in this post. I was talking about the 7k price tag at the time, simply because we were still in the pre-halving days but we are now looking at a price tag of at least 12k on average (of course, it really depends on the electricty and storage costs of the mining facilities). 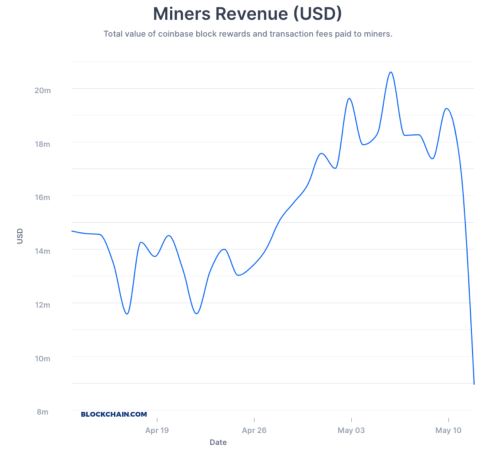 This graph shows the drop in the Bitcoin revenue from mining and as we see, it’s not been so low since the March crash which briefly took Bitcoin down to below $4k level. This poses a threat of a possible drop in the hash rate too. The hash rate was 136 EH/s before the halving, but it could easily drop below 90 EH/s, and perhaps even lower. Should that occur, we will start worrying about centralisation as more and more miners switch off their rigs or simply move on to other coins for more profitability. This is a real threat in fact, as it will give the biggest mining farms even more power and possible control over the network.

In conclusion, the bull run is not only necessary for us to make some profits, but is essential to keeping the network thriving, diverse and as decentralized as possible.

JK Rowling tweets about Bitcoin… the reaction is priceless.

5 coins to 5 million: my thoughts on Teeka’s secret list of alts.

7 thoughts on “One week after the BTC halving – where are we at?”